lighty.io is an SDK that provides components for the development of SDN controllers and applications based on well-established standards in the networking industry. It takes advantage of PANTHEON.tech’s extensive experience from the involvement in the OpenDaylight platform and simplifies and speeds up the development, integration, and delivery of SDN solutions.

FRINX UniConfig provides a common network API across physical and virtual devices from different vendors. It leverages an open source device library, which offers connectivity to a multitude of networking devices and VNFs.

The API provides the ability to store intent and operational data from services and devices, enables to commit intent to the network, syncs from the network so that the latest device state is reflected in the controller, compares intended state and operational state and provides device and network wide transactions. All changes are applied in a way that only those parts of the configuration that have changed are updated on the devices.

NETCONF devices can be configured via their native YANG models or via OpenConfig. Finally, FRINX UniConfig also provides service modules based on IETF YANG models for the configuration of L2VPNs, L3VPNs and enables the collection of LLDP topology information in heterogeneous networks.

The UniConfig Framework is based on open source projects like OpenDaylight and Honeycomb. It publishes all translation units under the Apache v2 license. Customers and integration partners can freely contribute, modify and create additional device models, which work with the UniConfig Framework.

How did PANTHEON’s lighty.io help? 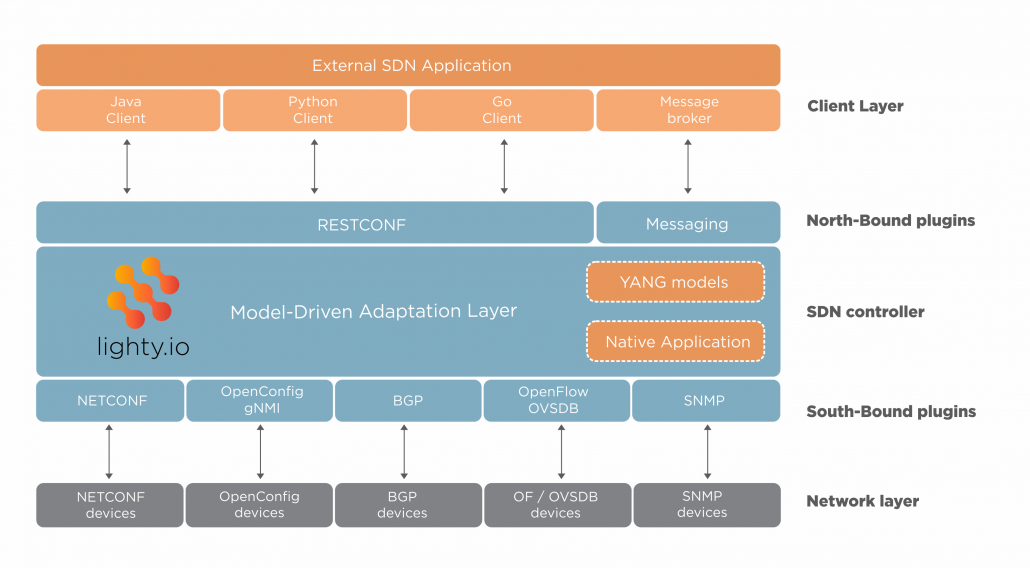 Porting UniConfig to lighty.io required no changes to the application code and has brought many measurable improvements. UniConfig now starts faster, has a smaller memory footprint, and most importantly – significantly reduces build time.

lighty.io packs many features, some of which are:

FRINX offers solutions and services for open source network control and automation. The team is made up of passionate developers and industry professionals who want to change the way networking software is created, deployed and operated. FRINX offers network automation products and distributions of OpenDaylight and FD.io in conjunction with support services. They are proud to count service providers and enterprise companies from the Fortune Global 500 list among its customers.

PANTHEON.tech is a software research & development company focused on network technologies and prototype software. Yet, we do not perceive networks as endless cables behind switches and routers. For us, it is all software-defined. Clean and neat. Able to dynamically expand and adapt according to the customer’s needs.

We thrive in a world of network functions virtualization and arising need for orchestration. Focusing on SDN, NFV, Automotive and Smart Cities. Experts in OpenDaylight, FD.IO VPP, PNDA, Sysrepo, Honeycomb, Ligato and much more.