PANTHEON.tech has contributed to another important milestone for the ODL community – OpenDaylight Performance Testing.

You might have seen our recent contribution to the ONAP CPS component, were focused on performance testing as well. Our team worked tirelessly on enabling the OpenDaylight community to test the performance of their NETCONF implementation. More on that below.

To be able to manage hundreds or thousands of NETCONF enabled devices without any slowdown, performance plays a crucial role. The time needed to process requests regarding NETCONF devices causes additional latency in network workflow, therefore the controller needs to be able to process all incoming requests as fast as possible.

The NETCONF protocol is a fairly simple mechanism, throughout which network devices can be easily managed. Also, configuration data information can be uploaded, edited, and retrieved as well.

NETCONF enables device exposure through a formal API (application programming interface). The API is then used by applications to send/receive configuration data sets either in full or partial segments.

The OpenDaylight controller supports the NETCONF protocol in two roles:

The Northbound plugin is an alternative interface for MD-SAL. It gives users the capability to read and write data from the MD-SAL data store, to invoke its RPCs.

The Southbound plugin’s capability lies in connecting towards remote NETCONF devices. It exposes their configuration or operational datastores, RPCs, or notifications, as MD-SAL mounting points.

Mount points then allow applications or remote users, to interact with mounted devices via RESTCONF.

Scalability testing is a technique of measuring system reactions in terms of performance, with gradually increased demands. It expresses how well the system can undertake an increased amount of requests, and if upgrading computer hardware improves the overall performance. From the perspective of data centers, it is a very important property.

It is frequent. that the number of customers or amount of requests increases over time and the OpenDaylight controller needs to adapt to be able to cope with it.

There are four test scenarios. These scenarios involve both NETCONF plugins, northbound and southbound. Each of them is examined from the perspective of scalability. During all tests, the maximum OpenDaylight heap space was set to 8GB.

The setup we used was OpenDaylight Aluminium, with two custom changes (this and that). These are already merged in the newest Silicon release.

The main goal of this test is to measure how many devices can be connected to the controller with a limited amount of heap memory. Simulated devices were initialized with the following set of YANG models:

Devices were connected by sending a large batch of configurations, with the ultimate goal of connecting as many devices as soon as possible, without waiting for the previous batch of devices to be fully connected.

The maximum number of NETCONF devices is set to 47.000. It is based on the fact, that ports used by NETCONF devices start at the value of 17.830 and gradually use up ports to the maximum value of ports on a single host – which is 65.535. This range contains 47.705 possible ports.

*- reached the maximum number of created simulated NETCONF devices, while running all devices on localhost

This test tries to write l2fibs entries (ncmount-l2fib@2016-03-07.yang modeled) to the controller’s datastore, through the NETCONF Northbound plugin, as fast as possible.

In terms of scalability, the NETCONF Northbound plugin was tested from two perspectives.

First, how well can OpenDaylight sustain performance (number of processed requests per second), while increasing the total amount of sent requests? Tests were executed in both variants, sending requests synchronously and also asynchronously.

In this scenario, it is desired, that the performance would be held around a constant value during all test cases. 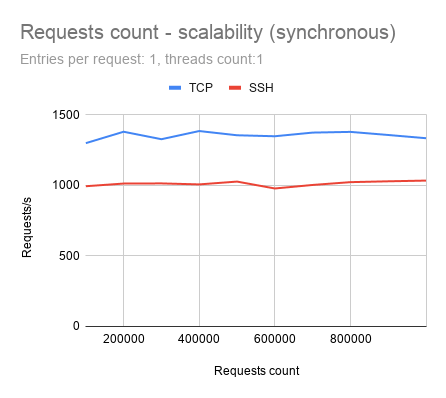 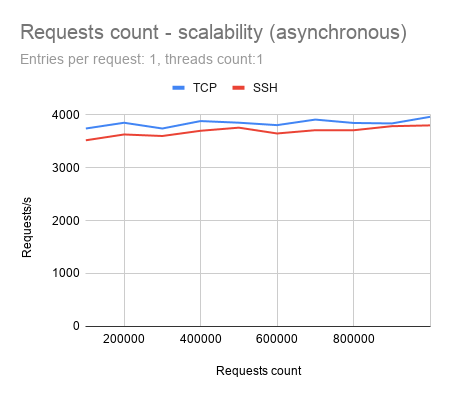 In the second case, we examined, how much time is needed to process all requests, affected by gradually increased request size (amount of elements sent within one request).

It is desired, that the total time needed to process all requests would be equal, or smaller, than the direct proportion of request size. 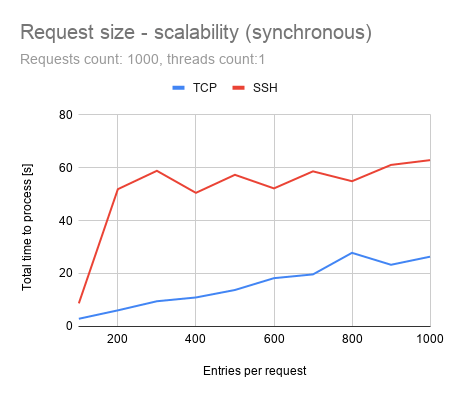 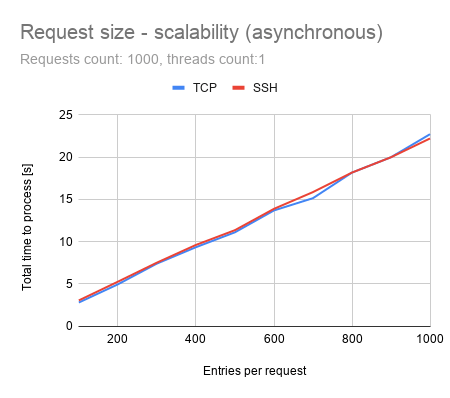 The purpose of this test is to measure, how many notifications, containing prefixes, can be received within one second.

All notifications were sent from a single NETCONF simulated device. No further processing of these notifications was done, except for counting received notifications, which was needed to calculate the performance results.

Scalability tests for the Southbound plugin were executed similarly to tests from the Northbound plugin – running both scenarios. Results are calculated by examining changes in performance, caused by an increasing amount of notifications and the total time needed, to process all notifications, while increasing the number of entries per notification. 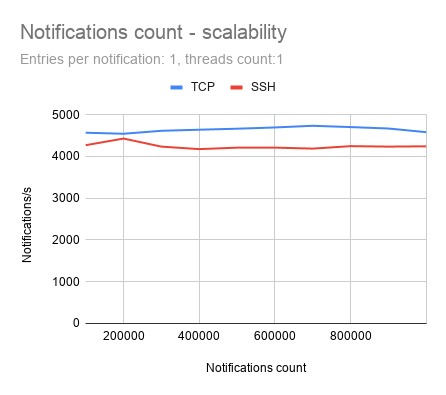 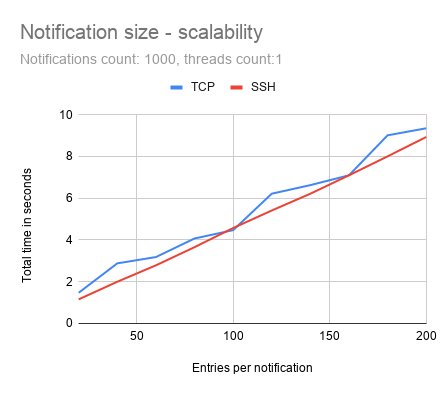 In this test, the client tries to write vrf-routes (modeled by Cisco-IOS-XR-ip-static-cfg@2013-07-22.yang) to NETCONF enabled devices via the OpenDaylight controller.

It sends vrf-routes via RESTCONF to the controller, using the specific RPC ncmount:write-routes. The controller is responsible for storing these data into the simulated devices, via NETCONF.

These tests were executed just like the previous scale test cases – by increasing the number of requests and request size. 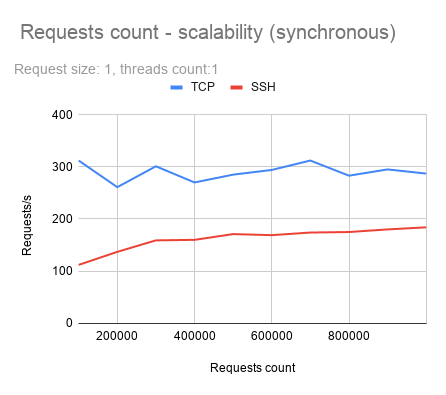 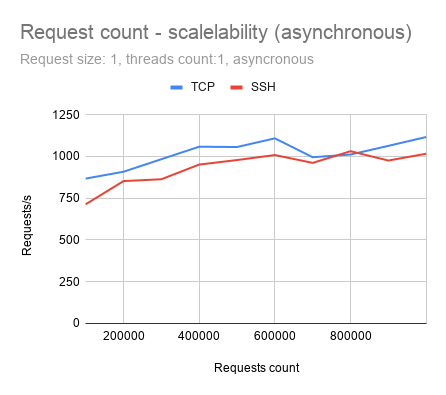 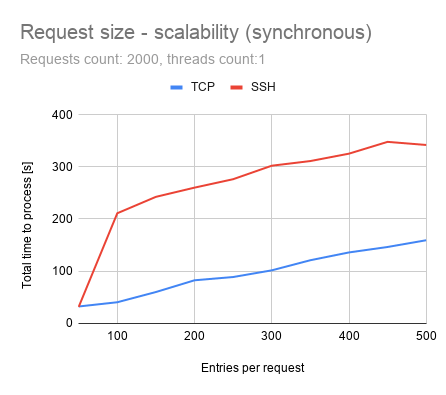 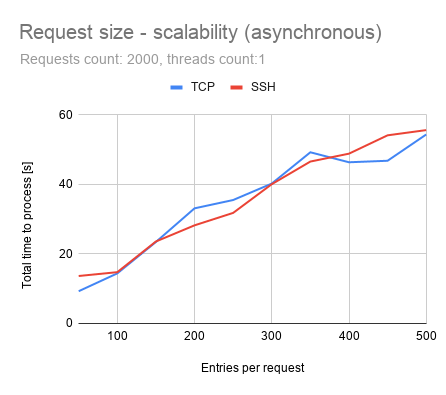 The test results show good scalability of OpenDaylight in terms of keeping almost constant performance while processing larger requests and the ability to process a growing size of requests without decreasing final performance too much.

The only exceptions were cases when requests were sent synchronously using SSH protocol. There is a sudden, significant increase in processing time when request size exceeds the value of 100. The maximum number of connected devices shows good results within the ability to connect more than 47 000 devices with 4GB of RAM and 26 000 devices with 2GB of RAM.

By using the TCP protocol, those numbers are even higher. TCP protocol, in comparison with SSH, results as the faster one, but at the cost of many advantages that the SSH protocol brings, like data encryption, which would be critical for companies, which needs to keep their data safe.

Examining differences in performance between SSH and TCP protocol is part of further investigation and more parts on Performance Testing in OpenDaylight, so stay tuned and subscribed!

[What Is] Network Fabric: Automation & Monitoring