PANTHEON.tech has created a commit in the official OpenDaylight repository, which updates the version of Swagger generator to OpenAPI 3.0.

This feature allows us to easily generate a JSON with RESTCONF API documentation of OpenDaylight RESTCONF applications and import it into various services, such as ServiceNow®. This feature is not only about the generation of JSON with OpenAPI. It also includes Swagger UI based on generated JSON.

What is RESTCONF API?

RESTCONF API is an interface, which allows access to datastores in the controller, via HTTP requests. OpenDaylight supports two versions of RESTCONF protocol:

OpenAPI, formerly known as Swagger UI, visualizes API resources and enables the user to interact with them. This kind of visualization provides an easier way to implement APIs in the back-end while automating the creation of documentation for the APIs in question.

OpenAPI Specification on the other hand (OAS for short), is a language-agnostic interface description for RESTful APIs. Its purpose is to visualize them and make the APIs readable for people and PCs alike, in YAML or JSON formats.

OAS 3.0 introduced several major changes, which made the specification structure clearer and more efficient. For a rundown of changes from OpenAPI 2 to version 3, make sure to visit this page detailing them.

How does it work?

OpenAPI is generated on the fly, with every manual request for the OpenAPI specification of the selected resource. The resource can be the OpenDaylight datastore or a device mount point. 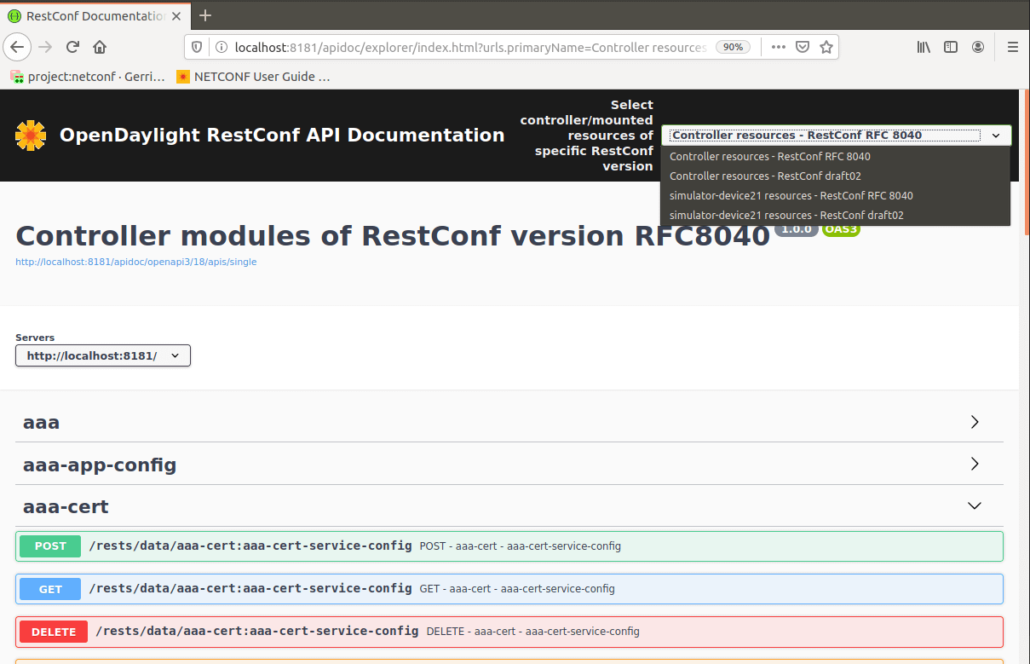 The apidoc is packed within the odl-restconf-all Karaf feature. To access it, you only need to type

in the Karaf console. Then, you can use a web browser of your choice to access the apidoc web application over the following URL:

Once an option is selected, the page will load the documentation of your chosen resource, with the chosen protocol version.

The documentation of any resource endpoint (node, RPC’s, actions), is located under its module spoiler. When you click on the link:

you will get the OpenAPI JSON for the particular RESTCONF version and selected resource. Here is a code snippet from the resulting OpenAPI specification:

You can look through the entire export by clicking here.

Our Commitment to Open-Source

PANTHEON.tech is one of the largest contributors to the OpenDaylight source-code, with extensive knowledge that goes beyond a general service or integration.

This just goes to show, that PANTHEON.tech is heavily involved in the development and progress of OpenDaylight. We are glad to be part of the open-source community and contributors.