Sysrepo, an open source project developed by several partners including Pantheon Technologies, participated at the IETF 96 Hackathon in Berlin, held from July 16th to July 17th, 2016.

The IETF Hackathon is all about promoting the collaborative spirit of open source development and integrating it into IETF standards. The Sysrepo project provides a framework that can be used to bring NETCONF & YANG management to any existing or new Unix/Linux application, which should help spreading these IETF standards into the wider open source community.

The hackathon was our first opportunity to introduce the Sysrepo project to the audience experienced with NETCONF & YANG standards. In front of our poster (see below), we led many constructive discussions with other participants and have gained lots of feedback. 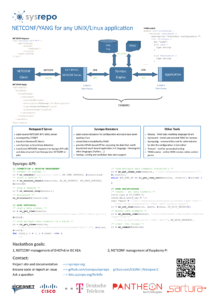 Apart from presenting the project to other participants of the IETF meeting, we spent the weekend by hacking on three sub-projects based on Sysrepo:

To demonstrate that NETCONF & YANG are also applicable in the IoT (Internet of Things) domain, as well as to demonstrate that Sysrepo can work also on systems with limited resources, we prepared a simple Sysrepo plugin that can control GPIO pins of the Raspberry Pi. We’ve demonstrated this on a relay switch and a thermal sensor connected to the GPIO of the Pi running on Raspbian Linux with Sysrepo and Netopeer2 – we were able to turn the relay on or off via NETCONF, or retrieve the current temperature gained from the sensor via NETCONF. 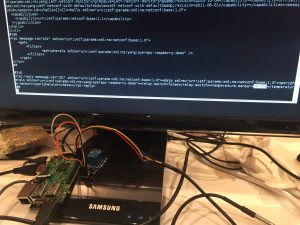 Another part of the team formed out of the hackathon participants focused on development of a Sysrepo plugin that implements the ietf-system YANG module on a generic Linux host. During the hackathon, they managed to write the code that allows NETCONF management of the host name, clock & timezone settings, and is capable of restarting and shutting down device via NETCONF RPCs.

The developers of the ISC Kea DHCP server joined our team with a clear goal: enable NETCONF/YANG management of their DHCP daemon using Sysrepo and Netopeer2. During the hackathon they wrote a Sysrepo plug-in for ISC Kea that is able to manage some part of Kea’s configuration via NETCONF. Their work hasn’t stopped after the hackathon ended – they expressed an interest to continue in this direction in the future too.

After the hacking ended, each team prepared a short presentation of their achievements. These were streamed online and are available on YouTube:

Although the biggest achievement for us was the high interest in the Sysrepo project among the IETF meeting participants, and all the feedback we gained from them, we were also selected as a winner in the „Most Importance to IETF“ category. You can read more about that in this blog post.

We use Google Tag Manager to manage all our scripts - this means, you can turn all of them off here. These cookies collect information that is used either in aggregate form to help us understand how our website is being used or how effective our marketing campaigns are or to help us customize our website and application for you in order to enhance your experience.